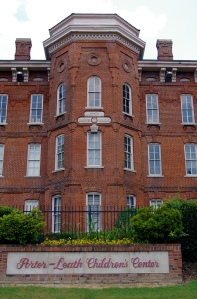 I went looking for a photo of Georgia Robinson who was the superintendent at Porter-Leath orphanage at the time of my mother’s adoption.  My maternal grandmother walked right into a trap when she sought and was granted TEMPORARY care for my mom while she tried to get on a more solid financial footing – after my mom’s father failed to answer a letter from the Juvenile Court of Memphis about his obligations to them.

It is interesting that there is no photo readily available for this woman but the adoption file clearly indicates that she alerted Georgia Tann almost immediately to my mom’s presence there.  Miss Tann had a repeat customer who had been waiting almost a year for a baby sister to complement the little boy she had adopted a few years earlier.

In the investigation into Georgia Tann’s baby stealing and selling legacy, Miss Robinson appears not to have been directly implicated but it is no small wonder to me that just before the criminality was made public, she suddenly decided to “retire”.  She moved out to California and lived with her sister in good health for over a decade.

In the book, The Baby Thief, the author notes –

What I found in contemporary newspaper articles was, at the time, Georgia Robinson was lauded for her long years of work there at Porter-Leath and was generally respected.  Though the author doesn’t name the orphanage, I’m relatively certain the vague mention was actually the orphanage that Miss Tann sourced my mom from.