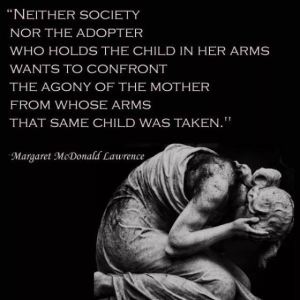 The argument is wrong on so many levels that it is hard to know where to start.  One thing that really irks me is when people and organizations use adoption as an excuse to be anti-choice.  Being pro-choice is not the same as being pro-abortion.  Abortion is often a difficult decision and sometimes haunts a woman for the rest of her life.  She should not be forced into back alleys and dangerous procedures when she sees no other way to end a conception that she never intended.

Adoption is not a solution to abortion. Adoption is a choice about whether or not to parent. A lack of family support is often at the root of a decision to abort or surrender to adoption.  The separation of a child from its mother has wounds that well-meaning people neglect to understand.  The bonding of a child with its mother begins in the womb and no substitute mother is similarly prepared by nature.

How much of a choice is abortion or adoption when you don’t have any other choices?  3 of the 4 children in my family line surrendered to adoption were because there was no other viable choice.  Only one intentionally chose to surrender and intentionally chose the adoptive parents.  Due to a mental illness that manifested quite strongly after that event, I am grateful she made that choice – the young man has grown into a phenomenal person within a nurturing environment.

I am a believer in Reproductive Justice.  Access to safe, legal, and free or affordable contraception and abortion, informed and sensitive adoption policies, comprehensive sex education, and ethical and compassionate immigration policies that don’t criminalize asylum seekers are all examples of reproductive justice issues. Reproductive justice is a framework for considering your ability to control your reproduction and your destiny, safely and with dignity.