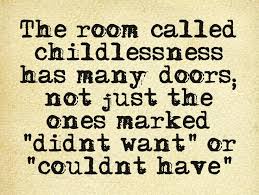 The world already has enough people.  More and more, deciding to remain childless is an option people are choosing deliberately.  My husband and I don’t even know whether our sons will ever marry and/or have any children.  There will never be pressure from us in that regard.

The decision to have children occurs within a pronatalist social context.  When I was a senior in high school in 1972, I knew I was going to continue getting advanced education, work full time, get married and have children.  No wonder I failed.  Some women may excel at the SuperWoman effort but I did not.  I never got a degree, I ended up divorced and financially unable to provide for my child.  But I have had to work at some kind of revenue producing effort all of my life.

Why do those that cannot have their own children think that domestic infant adoption is another way to build their family?  I suppose because it has been promoted as a good thing and socially acceptable for decades now – at least as far back as the 1930s.

Our culture views parenting as an essential part of achieving fulfillment, happiness, and meaning in life, and as a marker of successful adulthood.  When my husband told me that he wanted to be a father afterall (after 10 years of being grateful I had been there and done that and no pressure on him), I was a bit shocked and it was not an easy path for us.  I am still grateful medical science had a way to make it possible, even if it involved some non-traditional sacrifice on my part.  Having children did deepen and expand upon our relationship as a couple, making us a family.  As we are aging without any other family nearby, we are grateful our children may be there for us.

Remaining childless by choice (AKA childfree) is still an outlying path, a move that raises questions and is met with prejudice and even moral outrage. This is particularly true for women, whose gender identity and social value have long been tied to fertility and motherhood. Thus, women who decide to not have children are commonly viewed unfavorably.

Though I now see the problems and emotional fallout of adopting children, I also do recognize that a mature person can love any child genuinely.  It is not necessarily a selfish motive or ego stoking decision.  Children are easy to love for most well balanced and emotionally healthy persons.  Sadly, there are people who are not that and should not have children.  Personally, I respect any mature person who knows themselves well enough to know they shouldn’t take on the responsibility of raising a child.  There should be no negative perceptions from anyone else towards those who make such a choice.