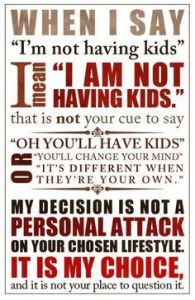 I have a friend who recently underwent a procedure that will permanently sterilize her at 21 because she is certain she wants to be childfree.

Recently laws have passed that allow drs to deny this based on “good conscience”. It was already difficult enough to get it done.

Some of the comments I’ve seen/heard –

“I can’t believe you would do that. What if you marry a man who wants children?”

“Sterilization should be illegal when there’s so many desperate good families hoping to adopt a newborn baby!”

Tell me – Why this is problematic ?

(I know why…I’m ready to protest it. I’m tired of laws going backwards. I’ve spent 2 years fighting with insurance over my own body just to have surgery because I’m at an extremely high risk for life threatening pregnancies.)

My body is not a political opinion nor is it my job or another woman’s job to be an incubator to push babies out for you because you’re infertile.

One woman shared – On Mother’s Day at my job I was asked if I have kids. I said no and I never want kids. Everyone acted like I’d just said something so heinous. One co-worker told me I should have babies and sell them. Like WTF ?!

She added –  it really pisses me off how many stories I’ve heard about women who want to get this procedure and can’t because doctors say they need to have at least one kid already, they need a man’s approval, and/or they’re too young. Meanwhile, women have to put up with the side effects of birth control methods. It’s really belittling of women to think they can’t make these decisions for themselves. And misogynistic to leave it up to the husband to give his approval for the procedure. Or to not do it because there’s no male significant other to ask for permission. Like women can’t have their own bodily autonomy. As if we’re just possessions for men and only have value as breeders (a term that Georgia Tann used – dehumanizing).

One woman put it rather simply – If you don’t want children, you don’t marry someone who does. That’s basic compatibility.

Then there was this woman’s personal story –  My older sister, now 40, still looks for a doctor to do a sterilization for her. She has never wanted a baby and asked at her first gyn appointment, when she was about 13, when she could have a sterilization. She never once wavered but it looks like she will never receive her desired treatment, because every doctor she asks, thinks she might change her mind. This so f***s me off! It’s her body, her decision, her money. Why does nobody give a f**k, when a man has a vasectomy??? Even childless men seem to be allowed to have one without questioning. That’s so biased.

My personal perspective ?  It is our body, given to us to utilize however we want to while alive on this Earth.  Every person’s decision should be honored as long as it is within legal boundaries – that includes abortion, sterilization, divorce, etc.