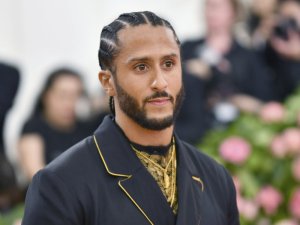 Colin Kaepernick’s life story is soon to be streamed on Netflix.

“The series provides an introspective look at Kaepernick’s early life as a Black child growing up with a white adopted family and his journey to become a great quarterback while defining his identity. The series will focus on Kaepernick’s formative high school years, lending meaningful insight into the acts and experiences that led him to become the activist he is today,” according to a series synopsis.

Kaepernick added in a news release: “Too often we see race and Black stories portrayed through a white lens. We seek to give new perspective to the differing realities that Black people face. We explore the racial conflicts I faced as an adopted Black man in a white community, during my high school years. It’s an honor to bring these stories to life in collaboration with Ava Duvernay for the world to see.”

Kaepernick was born in 1987 in Milwaukee, Wisconsin, to Heidi Russo, who is white. His birth father, who is African-American (of Ghanaian, Nigerian, and Ivorian ancestry), separated from Russo before Kaepernick was born. Russo placed Kaepernick for adoption with a white couple named Rick and Teresa Kaepernick. The couple had two older children: son Kyle and daughter Devon. The Kaepernicks decided to adopt a boy after losing two other sons to heart defects.

Kaepernick lived in Fond du Lac, Wisconsin, until age four, when his family moved to California. When he was eight years old, Kaepernick began playing youth football as a defensive end and punter. At age nine, he was the starting quarterback on his youth team, and he completed his first pass for a long touchdown.

He was a 4.0 GPA student at John H. Pitman High School in Turlock, California. Kaepernick played football, basketball and baseball and was nominated for all-state selection in all three sports his senior year. He was the most valuable player (MVP) of the Central California Conference in football, leading his school to its first-ever playoff victory. In basketball, he was a first-team All-CCC selection at forward and led his 16th-ranked team to a near upset of No. 1-ranked Oak Ridge High School in the opening round of the playoffs. In that game, Kaepernick scored 34 points, but future NBA player Ryan Anderson of Oak Ridge scored 50 points to lead his team to a victory.

Few noticed the first protest by Kaepernick because it came before a home preseason game in August 2016. He remained seated on the bench, and when asked about it by a reporter after the game, he explained: “I am not going to stand up to show pride in a flag for a country that oppresses black people and people of color. To me, this is bigger than football, and it would be selfish on my part to look the other way. There are bodies in the street and people getting paid leave and getting away with murder.”

There had been several shootings of unarmed black men that summer, and Kaepernick acknowledged his actions could have consequences. “If they take football away, my endorsements from me,” he said, “I know that I stood up for what is right.”

Kaepernick went from sitting to kneeling after a conversation with Nate Boyer, a former Green Beret and NFL player. “We sort of came to a middle ground where he would take a knee alongside his teammates,” Boyer told HBO’s Real Sports. “Soldiers take a knee in front of a fallen brother’s grave, you know, to show respect.”

How he has been treated has been very wrong. Our own president did not help the situation. Now Kaepernick is seen as having been on the right side of justice by many people all over the world.