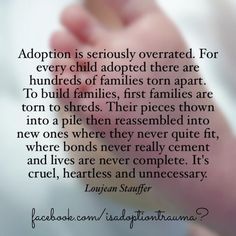 The trauma of being separated from your mother can’t be ignored. No matter the age of the child. The trauma is intensified by the fact that an infant can’t understand, healthily process, or vocalize what’s happening to them.

One of the first things I learned about Georgia Tann was her assertion that the babies she provided to adoptive couples were a blank slate they could mold in their own image and preferences.  This is decidedly obsolete and archaic thinking. You can’t try to put a square peg in a round hole and expect it to fit.

This blank slate idea was never the truth as many adult adoptees can tell you today, as families in reunion discover where their natural traits actually came from.  One such story from an adoptee is this – I really never related to my adopted family. We didn’t enjoy the same activities, foods, interests etc. When I finally found my birth family the very first night I felt like I was finally home.

My own daughter and two sons have often reminded me of how much they are their own person.  My daughter may have some personality aspects that feel very much like my own but she is not a mini-me.  Even our two boys raised under very similar circumstances are different from one another, reminding me to treat each one as individually as they deserve. Any adoptive parent who expects things to be any different is simply fooling themselves with a fantasy that cannot be fulfilled.

And people can be so clueless and ask the most awkward questions.  Case in point.  One woman shared – I am a brown Latina woman. I went to a birthday party for my daughter’s friend (4 at the time) and I was holding our foster son and as soon as I walked in a woman said to me, ‘how did you get a ‘white baby’?! I was so shocked that I could not think of what to say. I’ve practiced a lot since then. LOL.

Or how some people after an attempt to “educate” them will say something like – “God clearly put you together and meant for you to be a family.” At that point, an enlightened adoptive mother might get more forceful and say that if their god had intended us to be a family, he would have made it so without putting my child through adoption trauma. The woman who shared this went on to say “I don’t really stand for people who think they can speak for their god, especially when it comes to adoption.”

One of the uglier remarks come from a person who upon learning a child had been adopted, went on to say they are so glad the child won’t turn out like their original parents.  In front of the child no less.

As for the blank slate theory, regardless – no one should become a parent simply to enforce what they want on their children. Parents to help their children become the best version of themselves, find their own path and passions, and are supportive of the child along the way.

2 thoughts on “Not A Blank Slate”