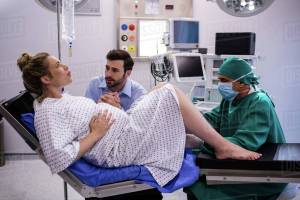 Globally, today is known as Labor Day (although celebrated later in the year in the United States).  I know that usually, Labor Day, relates to paid work but women do the work of Labor all the time.

Every child at this time in human evolution comes into the world through a woman’s womb.  Aldous Huxley in his book Brave New World anticipated huge scientific developments in reproductive technology.  And in fact, in my lifetime such developments made it possible for me to give birth at ages 47 and 50.  In Huxley’s novel, citizens are engineered through artificial wombs (which I am happy we have not evolved to yet) and childhood indoctrination programs that sort them into predetermined classes (or castes) based on intelligence and labor demands.

I found pregnancy mostly delightful.  Not everyone does.  And always my labor was not unfortunately memorable.  With my first pregnancy at age 19, my water broke and I was taken to the hospital quickly.  My doctors were busy in surgery at a different hospital.  I was managing my labor just fine but they knocked me out.  I woke up in the delivery room briefly to see my doctor putting on his gloves.  The next thing I knew, I was being wheeled down a corridor and a nurse was showing me a baby and telling me that I had a daughter.  I was so certain I was having a son, she had to tell me three times.  I did see my family’s resemblance in the tiny infant.

Because the experience I had with my daughter was unsatisfying, with my oldest son’s pregnancy I took Bradley classes, wanted to give birth naturally at home with a midwife (which at the time was illegal in my state of Missouri).  It was not to be because just before he was conceived, I also learned I was positive for the hepatitis C virus.  Research had determined we could prevent transmission with a caesarean section.  With both boys, that is what we did and they both tested negative at 18 months old.  A mother does what a mother has to do for her child, not for her own gratification.

For some mothers, going into labor ends their relationship with their child – either because the baby is stillborn (a real tragedy but nature’s way in some cases) – or because the mother is surrendering her child to someone else to raise (also a tragedy but of a different sort).

There are many adoptive parents who celebrate receiving a child in this manner and they would not agree with my perspectives but every adoption begins with a loss for someone else.