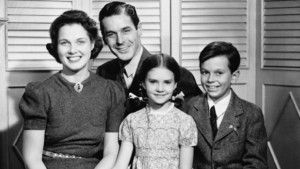 I grew up with this televised image of the “perfect” family.  Though it never did represent what most families actually are.

My mom’s adoptive family looked the most like the one above.  My adoptive grandmother bought her Jack and Jill from Georgia Tann.  My dad’s adoptive family was mostly the influence of my Granny, who adopted two sons from the Salvation Army and then divorced her husband, who was an alcoholic and abusive – not only towards her but towards her sons.  My dad was re-adopted at the age of 8 by the next husband, who I knew as my grandfather.

Those adopted children were my parents, who met in high school.  We had 3 girls in our family.  I was the oldest.  My first marriage ended in divorce.  Eventually, my ex-husband and his second wife were raising my daughter because financially – I was unable to support us and he was unwilling to pay me child support.

In our modern times, we recognize many diverse family units.  Because the roles for fathers were changing when I had my daughter, I believed that mothers and fathers were interchangeable if divorce was the reality for the family unit.  I no longer believe mothers are dispensable.

And though I grew up with adoption as simply a fact of life and had no opinion about it other than acceptance – that it was just the way things were – I now see things differently.  I have educated myself by exposure to current day adult adoptees and the sadness and regret of original mothers who gave up their child for adoption.

An intact family unit is what I believe is the best environment for a child.  Two parents allow for one parent to buffer or moderate the other.  The next best is a single parent – mother preferred, father the next best.

For TRUE orphans who’s parents are dead, never should they have their identity, name at birth or original birth certificate changed to make it appear that other parents gave birth to them.  Society should also more fully support family preservation.

This is how I roll now.  I doubt it will change but I am certain I won’t go back to what I believed – before I knew “better”.